The World Peace Through Technology Organization

Inspiring peace through technology via education, art, music, and dance. 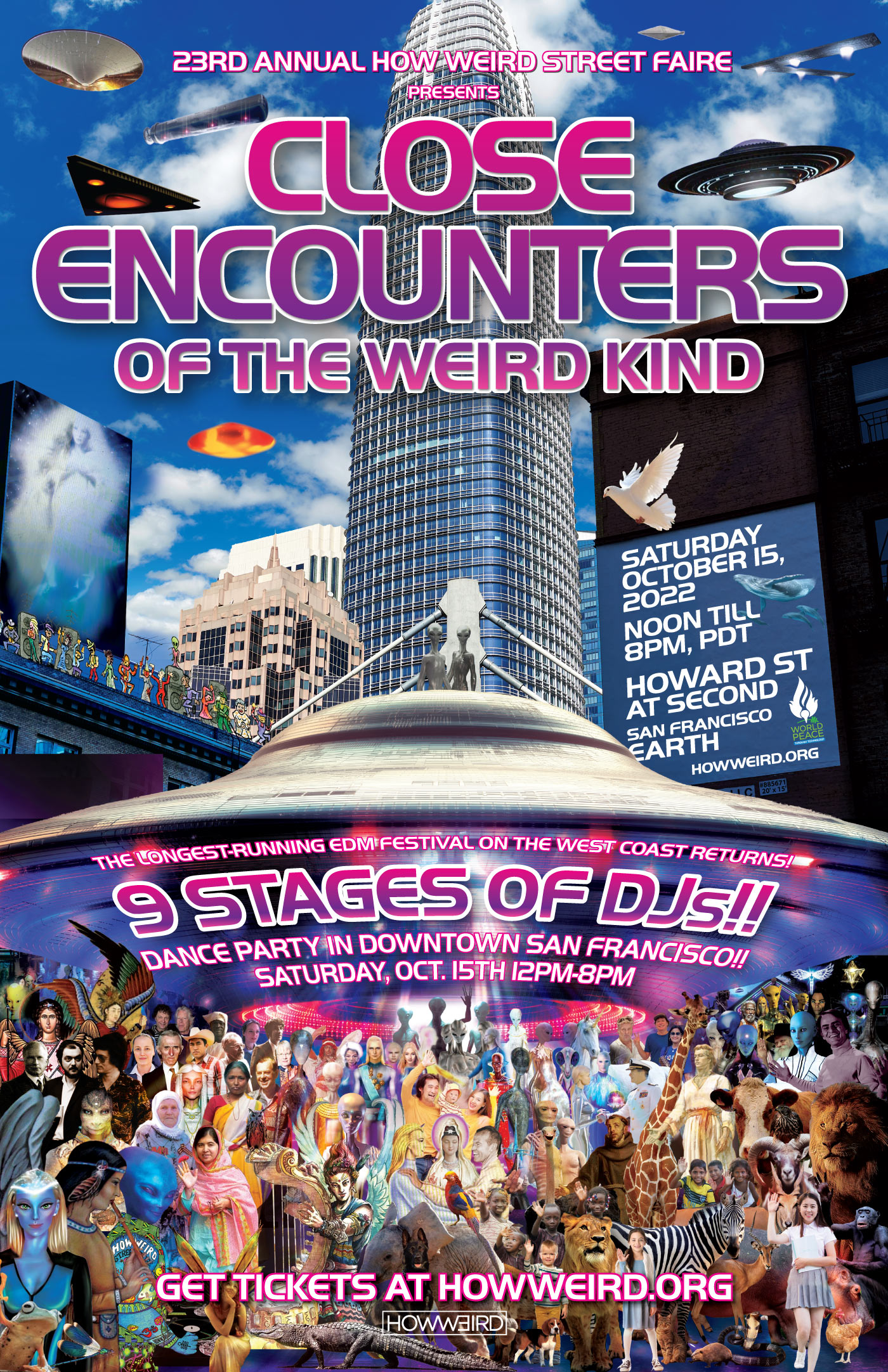 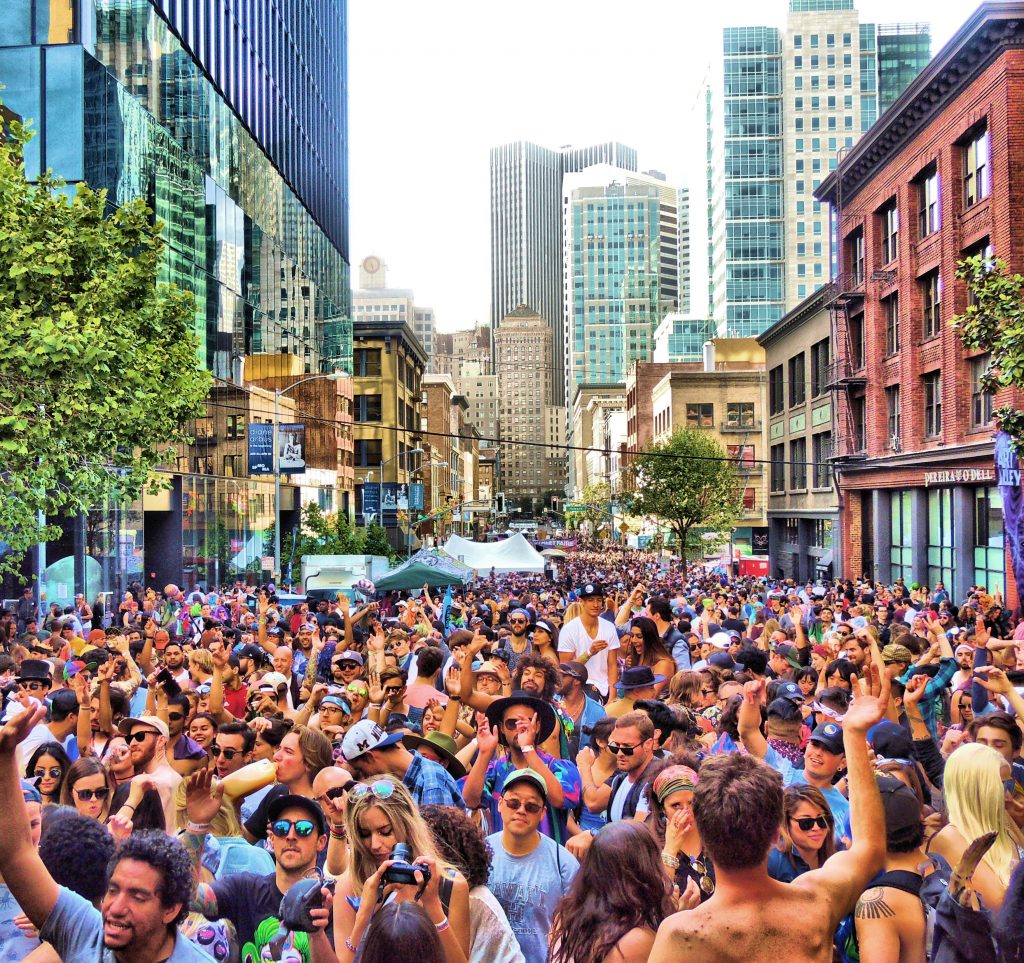 The How Weird Street Faire is our experiment in creating peace, and a fundraiser for the WPTTO. The faire takes place in downtown San Francisco, and attracts thousands of people in colorful costumes from around the world. The faire enables a very diverse community to find common ground and make connections. Come see the 23rd annual faire on Saturday October 15, 2022.

This year, the How Weird Street Faire will showcase the inspiring Art of Peace project of the nonprofit Robby Poblete Foundation. The Art of Peace transforms tools of violence into beautiful sculptures. The Art of Peace’s mission is not only to reduce gun violence, but to create hope and opportunity through its art and vocational programs. Pati Navalta, the Founder and Executive Director, explains: “We are taking weapons that are intended for destruction and transforming them into messages of peace.”

The Robby Poblete Foundation’s Art of Peace Program repurposes dismantled firearms by putting them into the hands of artists and metalworkers who transform the materials into original works of art.

The foundation was created in honor of Robby Poblete, who was killed by gun violence in Vallejo in September 2014. There have been three Art of Peace programs in the Bay Area. The first was in Vallejo, which was unveiled in May 2018, followed by Alameda County and San Francisco County. Some of the art from the San Francisco program will be unveiled for the first time at How Weird 2019, located next to the Info Booth at the center of the faire.

The nonprofit that produces the How Weird Street Faire, the World Peace Through Technology Organization, has commissioned a special Art of Peace dove, that will be shown for the first time at the center of How Weird 2019. The work is being done by local artists Labor and Love Designs. 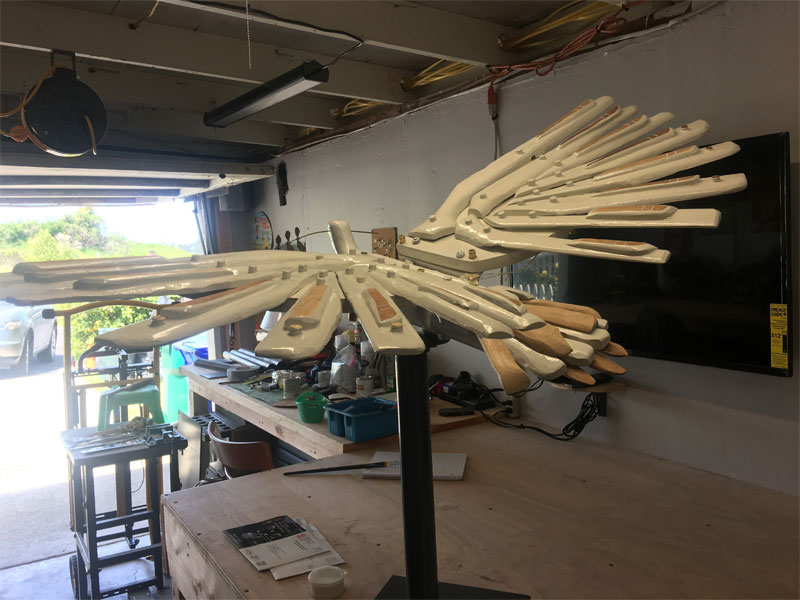 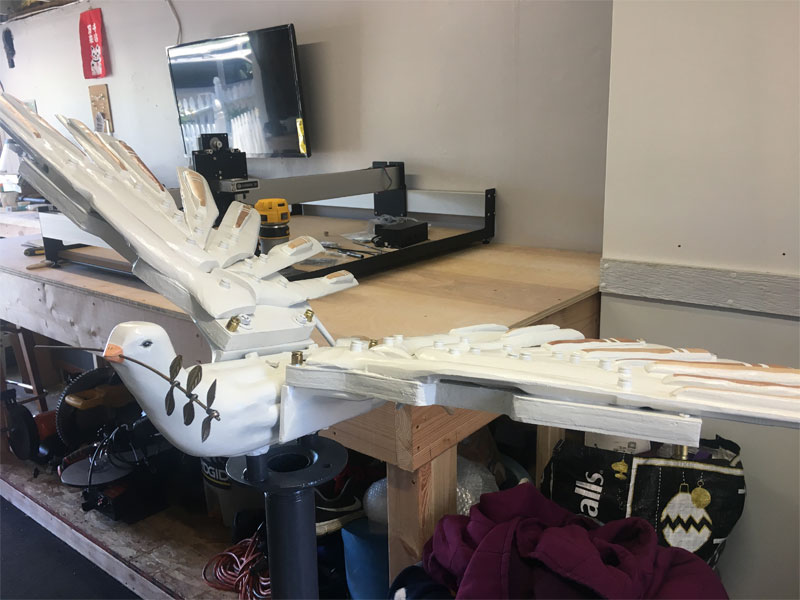 A mixed media sculpture by Natasha and Shameel Ali of Labor and Love Designs, made from dismantled firearm components, rifle/shotgun stocks and barrels, shell casings, sheet metal and steel, fiberglass, acrylic, enamel paints, and LED lights. The wings, tail feathers, and head are handcrafted from 14 rifle and shotgun woodstocks. And the body is built from 5 rifle and shotgun steel barrels. Throughout the piece are 44 9mm and 4 twelve gauge shell casings. The underside of the wings reveal a soft emanating light. All firearms were sourced from local gun buybacks held by the Robby Poblete Foundation for the Art of Peace, and evidence labs from crimes.

Labor and Love Designs explains the meaning behind the artwork, “We had the pleasure of working with the World Peace Through Technology Organization to bring their logo, a peace dove, to life. The dove is a mixed media sculpture designed to represent the ultimate transformation of deadly firearms into an age old symbolic gesture of peace. The dove truly captures the essence of what transformation is all about. Transformation from darkness to light, from evil to peace, from guns to a creature taking flight.”

Obtainium Works will also be showcasing some of their Art of Peace works in progress, including a Phoenix for the Robby Poblete Foundation. Obtainium Works happens to be the secret home of the Vallejo Mad Hatter Holiday Festival, and the home of streampunk culture in the Bay Area. They will be in costume, with some of their contraptions, around the center of the faire.

Our newest project is the Immersive Learning Center (or ILC) located in downtown Vallejo, CA. The ILC is an educational after-school program serving the most under-served school district in California. Students from the area are taught a range of STEAM subjects, and have access to the latest technologies. The students are taught how to collaborate and work together on projects, and network with other students from around the world. 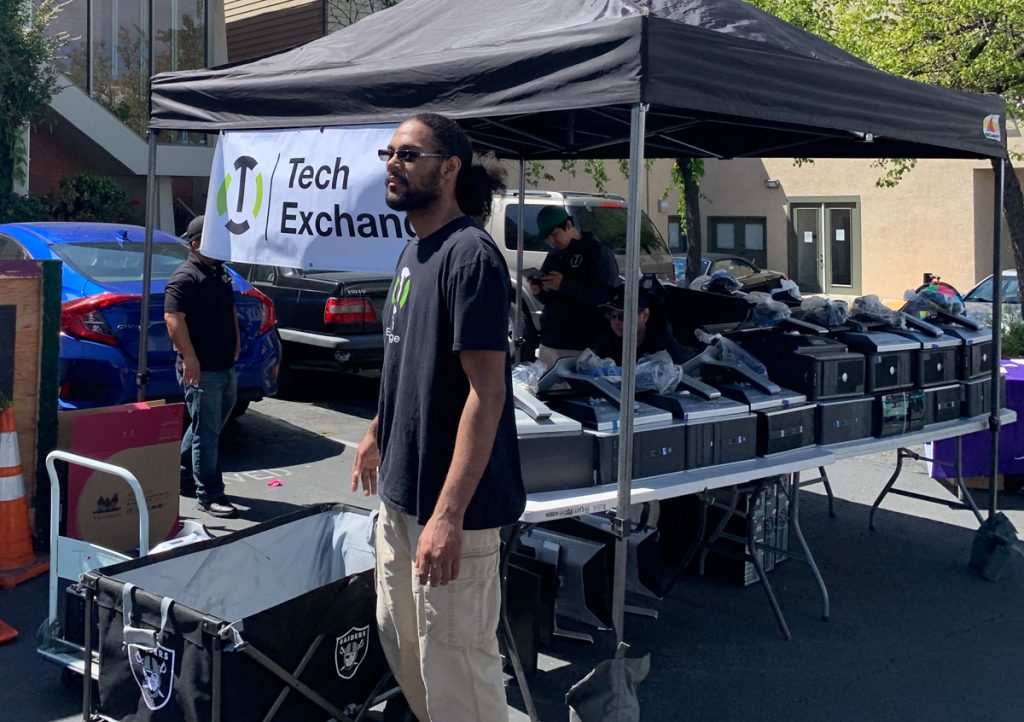 The ILC partnered with Tech Exchange in Oakland to give-away 150 PCs to the kids in Vallejo, California. WPTT started with the idea in 2000 of bridging the ‘digital divide’ and providing PCs to low income people in San Francisco and that tradition continues now in Vallejo, home to the ILC and WPTT headquarters. 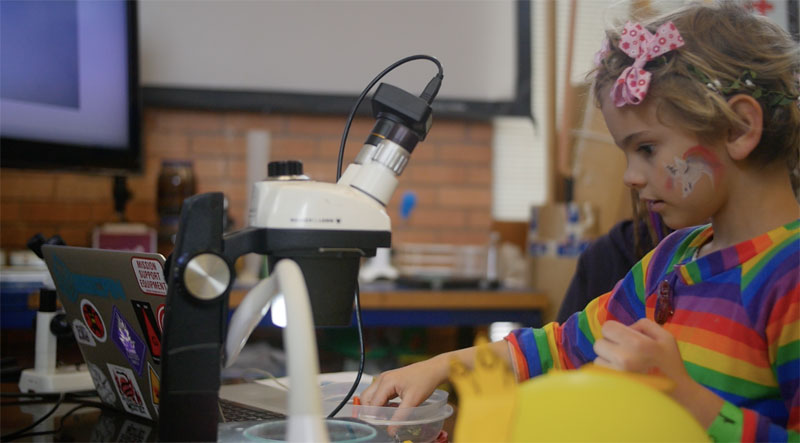 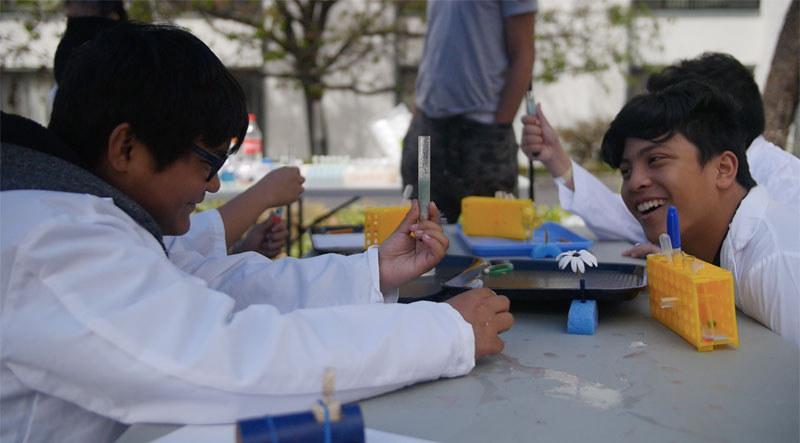 On Saturday, April 28th 2018, the WPTTO sponsored Immersive Learning Center (or ILC), hosted its 2nd Science Faire of the spring at its location in downtown Vallejo. Students and parents had a fun and educational day learning about electric circuits, virtual reality, looking at bugs and flowers under the microscopes, learning how to program mini-robots, and engaging in a variety of STEAM (Science, Technology, Engineering, Art, and Math) activities.

There is growing excitement and interest in the STEAM workshops that the ILC will be offering this coming summer, including the introduction of its ‘seed to table’ permaculture garden, where kids will be introduced to Ag-Tech (agricultural technology). Finally, WPTTO is working on its ‘AI (Artificial Intelligence) for Kids’ class that starts this coming Fall. The importance of addressing the ‘digital divide’ issues, part of WPTTO’s charter since its founding in the year 2000, remains a core part of its charter, and is delivering on this mission with the ILC project in Vallejo.

WPTTO is a supporter and sponsor of the following bay area nonprofits:

Peacetour.org – the legacy site for the World Peace Through Technology Organization, with important information on the history of “Peace”.

Our dream of travelling the world to create positive, interactive spaces for humans to experience the weird and unusual, and thereby grow their understanding and empathy. The tour would feature the latest technologies in a demo pavilion, as well as cutting-edge art and music.

Peacetour.com – Brad Olsen, one of the founders of the org, recently returned from the first peacetour trek through Antartica.

Our mission is to inspire peace through the benevolent uses of technology, and to raise human consciousness to the level of peace and understanding.

Our future plans include building the Mixed Reality How Weird Street Faire and WPTTO virtual/meta classroom in Mixed Reality.
How do we allow more people to have a shared experience together in a public space?  One answer is the concept of the Mixed Reality cloud, which enables people to share a high-precision and high-fidelity Augmented Reality view together in public.
Combining cloud computing with Augmented Reality + Virtual Reality = Mixed Reality over 5G (high speed mobile broadband + low latency) means a transformation of the internet as we know it, into a spatially enhanced aggregate that will become the heart of shared physical and virtual interaction.
Loading Comments...