Fed up with the violent conflict that has recently engulfed their country, musicians in the west African nation of Mali have come together to call for peace. More than 40 of Mali’s most talented musicians gathered in the capitol city of Bamako to record a song for peace and unity called “Mali Ko” (which means “For Mali”). They collectively call themselves the Voices United for Mali.

The song’s lyrics state, “It is time for us artists to speak about our Mali. Malians, let us join hands because this country is not a country of war. Dont forget that we are all of the same blood. The only way out of this crisis is the way of peace.” …

“War has never been a solution,” the lyrics say. “We don’t want war! Not in our Mali! War destroys everything in its path. We want peace. Peace in Africa! Peace in the world!”

Cultures of Resistance attended Mali’s legendary Festival in the Desert in 2009, and produced a short video called “Playing for Peace in the Sahara”. They describe how “in the Malian desert, musicians meet to build mutual respect by sharing cultures. Artists share their music and dance to emphasize what they have in common, rather than what separates them. This short film highlights the event’s approach to promoting cross-cultural expression as a means of overcoming the threat of divisive conflict.”

“When you have peace, you have everything.”

The largest gathering of humanity is taking place in northern India, a unique event that blends religious and cultural features, in an atmosphere saturated with the scent of burning incense, and the sound of chiming bells, Vedic hymns and mantras, and the beating of countless drums. More than 100 million people are expected to attend the two month festival and bathe in the waters of the Ganges River. For more than 2,000 years, the festival has been the main meeting point for the Hindu sadhus or holy men, giving people the opportunity to meet with the devotees of the various religious orders, and learn from the many religious teachers and spiritual masters…. 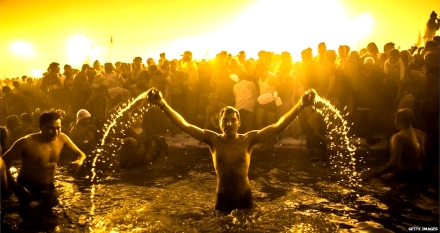 In 2001, the last time the Kumbh Mela took place, more than 40 million people gathered in an area smaller than 7.7 sq. miles (or slightly larger than San Francisco). This year they are expecting over twice that number, making it the largest gathering of humanity ever held. Yet in spite of all the people and chaos, it is a peaceful event.

Psychologists from St. Andrews, Dundee, and Lancaster Universities in the UK, along with several Indian institutions, completed a study in 2007 into Kumbh Mela in Allahabad. What they found along the banks of the Ganges River overturned many long-held beliefs about crowd behavior. Professor Steve Reicher, of St. Andrews, stated that “the mela is much more than a wonderful spectacle. It promises to unlock the secrets of how large communities can live together in harmony”.

The Kumbh Mela brings together the equivalent of over 20 times the population of the entire Bay Area in one place, yet there is virtually no disorder, crushes, or rioting. And even though people at the festival came from very different castes and social backgrounds, there was a strong sense of common identity. This positive outlook stemmed from a lack of the “them-and-us psychology” which is often at the root of social conflict.

Dr. Clare Cassidy, from St. Andrews University, explained that “many people argue crowds are bad for you. But in the Mela we found that people become more generous, more supportive, and more orderly rather than less. This is the opposite of a ‘walk-on-by society’, it is a community where people are attentive to the needs of strangers.”…

The 14th annual How Weird Street Faire takes place Sunday April 28, 2013 from Noon to 8pm in downtown San Francisco, centered at Howard and 2nd Streets. This year’s theme is “Weirdi Gras: A Carnival of Peace”.

The How Weird Street Faire is our experiment in creating peace, and a fundraiser for the World Peace Through Technology Organization. It has brought many different types of people together to celebrate peace. It has let people experience the reality of a place where cooperation is favored over competition, where diversity is celebrated, and where people can see that our differences are far fewer than our similarities. The How Weird Street Faire has made learning the foundations of peace fun and exciting.

For its 14th year, there will be 13 city blocks of art and celebration, including many stages of world-class performances and electronic music, marching bands, food and drinks, vendors from around the world selling unique and creative wares, and non-profit organizations to educate and inspire. Filling in the faire will be performance artists, thousands of people in colorful costumes dancing in the streets, and more parades than any street fair in the world. 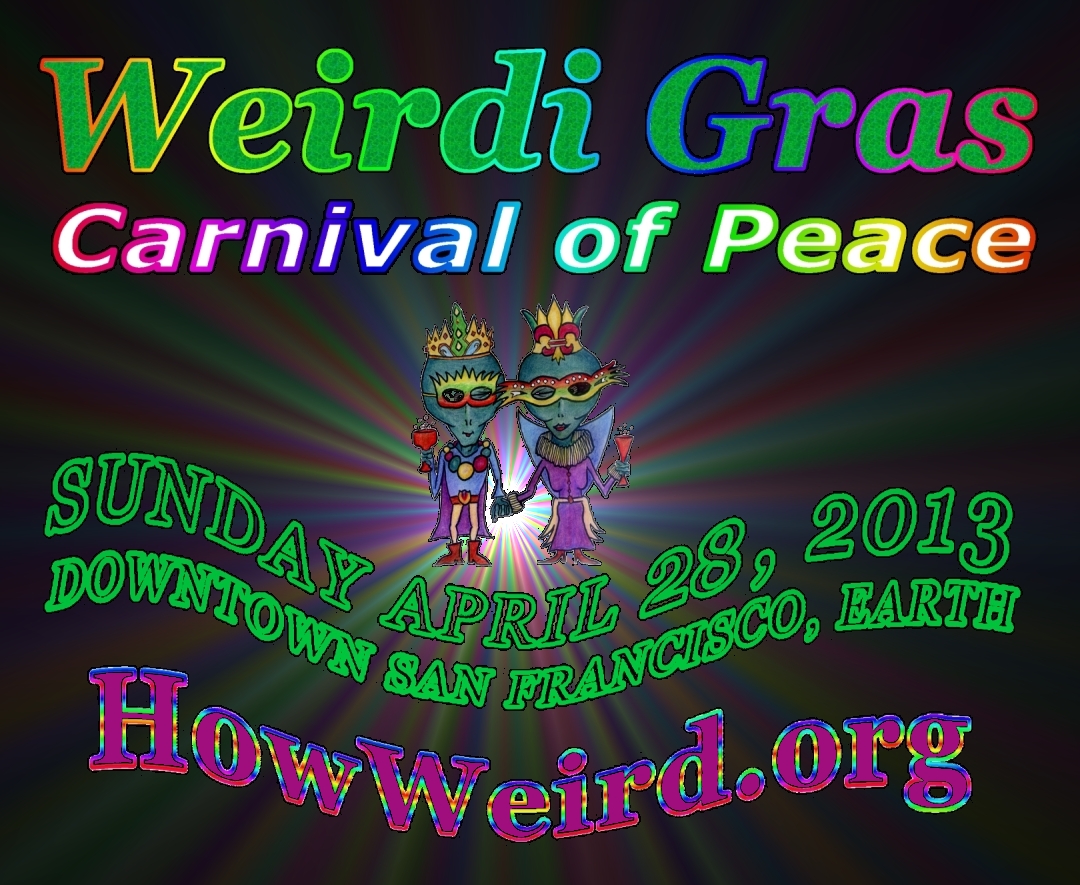