A unique contest was held to show that 3D printers could be a tool for peace. Michigan Technological University‘s Open Sustainability Technology (MOST) Lab and 3D printer manufacturer Type A Machines came up with a contest for designs that encourage peace. The deadline for submissions was September 1, 2013, for a chance to win a fully assembled Type A Machines Series 1 3D Printer for first place. As the contest explains, “Winning open-source designs will discourage conflict. Designers are encouraged to consider: If Mother Theresa or Ghandi had access to 3D printing what would they print? What kind of designs could help reduce military spending and conflict while making us all safer and more secure?”
http://www.mtu.edu/materials/printersforpeace/

The examples given of possible designs were low-cost medical devices, tools to help pull people out of poverty, designs that can reduce racial conflict, objects to improve energy efficiency or renewable energy sources to reduce wars over oil, tools that would reduce military conflict and spending while making us all safer and more secure, and things that boost sustainable economic development (e.g. designs for appropriate technology in the developing world to reduce scarcity).

The winners were announced yesterday, and first prize went to John Van Tuyl of Hamilton, Ontario. He created a design for beads that show immunizations, called VaxBeads. The plastic beads act as an immediate immunization record for medical professionals…. 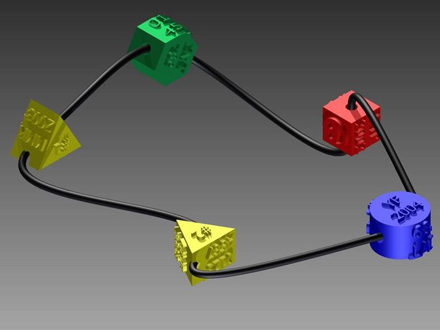 The contest was organized by Michigan Tech’s Joshua Pearce, an associate professor of materials science, who had become alarmed that 3D printing was known primarily as a technology for making homemade guns. “We wanted to celebrate designs that will make lives better, not snuff them out,” said Pearce, a 3D printing aficionado. “They showcase the ability of the 3D printing community to benefit humanity.”

“What I’m hoping this does is change the conversation to start really thinking about the constructive uses of 3D printers, not just on manufacturing, but trying to solve some of the most pressing problems, particularly in the developing world,” said contest creator Joshua Pearce. “All the open-source entries demonstrated the technical ability and promise of low-cost 3D printers to provide for humanity’s needs and advance the cause of peace.”

“Michigan Tech has already saved tens of thousands of dollars using 3D printable scientific and engineering equipment and our labs have developed 3D printable tools to test water quality, recycle waste plastic, and found that 3D printing consumer goods is better for the environment than shipping conventional goods from China.”

All the entries are posted on the website Thingiverse.com, which now has over 146,000 open-source designs that can be downloaded for free and printed by anyone with a 3D printer. As Pearce says, “3D printing is changing the world.” …