The Dymaxion Map is an iconic design that shows accurate information and supports a global perspective. The idea being that if you change the way you see the world, then you can change the world. 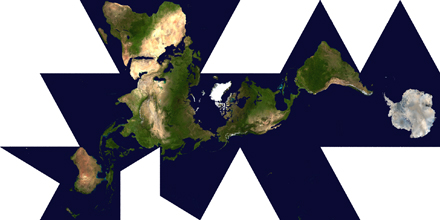 The Dymaxion Map was created by Buckminster Fuller in the 1940’s to accurately map the earth with no visible distortion to land masses, no political boundaries, and no western bias in its orientation. It was first printed in Life magazine in 1943, where map could be cut out from the printed pages and arranged in numerous ways. Fuller later settled on a permanent configuration, an icosahedron that broke up none of the land masses and showed the planet as one island in one ocean. The final map is a series of 20 interconnected triangles, which can be arranged to produce an icosahedron, reminiscent of Fuller’s geodesic dome geometries.

To celebrate the 70th anniversary of the Dymaxion Map, the Buckminster Fuller Institute launched a graphic design challenge, to take the Dymaxion into a contemporary context. The contest was called DYMAX REDUX, and was an open call to create a new and inspiring interpretation of Buckminster Fuller’s Dymaxion Map. The contest was judged by graphic designer Nicholas Felton, artist Mary Mattingly, and Dymaxion Map cartographer and Bucky’s close friend and associate, Shoji Sadao. The winner of the DYMAX REDUX contest would have the winning design produced as a poster, and along with the other ten finalists will be featured at an exhibition at the Cooper Union for the Advancement of Science and Art, in New York City from October 22nd to November 27th, 2013. They received over 300 submissions from 42 countries. “This was the first contest of its kind organized by BFI, and the response and interest has been amazing. We are thrilled to have such a high-level of submissions and look forward to doing more similar initiatives in the future” says BFI Executive Director Elizabeth Thompson.

On August 6th, they announced the winners of the contest. The top design was called Dymaxion Woodocean World. It was produced by Nicole Santucci and Woodcut Maps, from San Francisco, California.  Nicole and her team created a display of global forest densities, an ever-increasing important issue with the continued abuses of deforestation. And an actual woodcut version of the map was made in the process, using the very subject matter as building material, allowing the 2-D version to transform into an icosahedral globe. As BFI Store Coordinator Will Elkins put it, “They went above and beyond our call by creating a powerful display of relevant information using the subject matter itself as a medium. The idea, craftsmanship, and end result are stunning.” 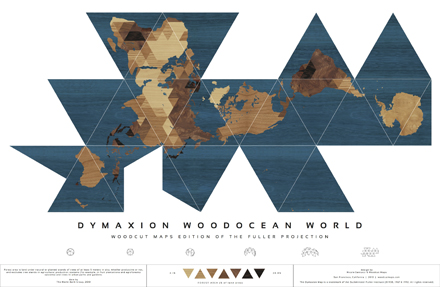 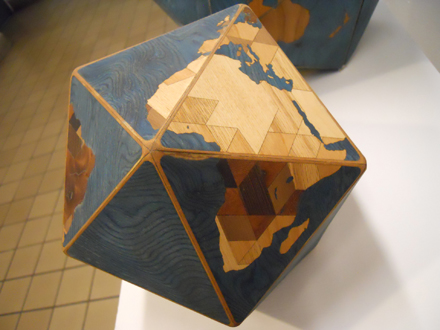 The second prize went to the Clouds Dymaxion Map, which follows the spirit of the original map. Anne-Gaelle Amiot used NASA satellite imagery to create this absolutely beautiful hand-drawn depiction of a reality that is almost always edited from our maps: cloud patterns circling above Earth. Anne-Gaelle describes the idea and process, “One of the particularism of Buckminster Fuller’s Dymaxion projection is to give the vision of an unified world. From the space, the Earth appears to us covered, englobed by the cloud masses which circulate around it. By drawing a static image, capture of clouds position in one particular moment, the sensation of a whole is created. The result have the aspect of an abstract pattern, a huge melt where it is impossible to dissociate lands, seas, oceans.”

And an additional recognition went to Map of My Family, a map by Goeff Chritou. His map traces the geographic history of his family, and by extension all families, utilizing lines of movement around the planet. “This map makes the best use of the Dymaxion projection, by highlighting information that is primarily land-based and allowing for the paths to extend in an unbroken fashion throughout the world,” explained judge Nicholas Felton.

In these changing times, it’s important to always ask… What would Bucky do? 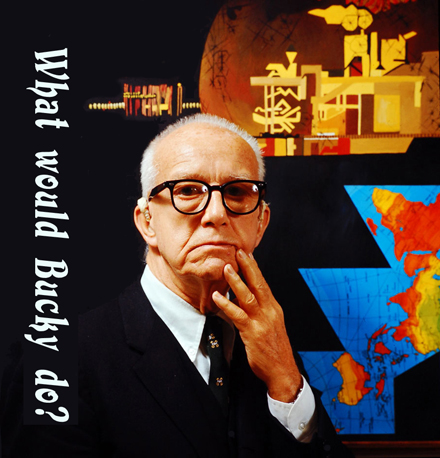 Buckminster Fuller Institute has a contest to redraw the Dymaxion Map