The theme of the 2010 How Weird Street Faire is “Bollyweird: The Cosmic Dance”.

The Cosmic Dance represents the movement of the universe, from the galaxies and planets, to all life, to subatomic particles.

According to Hindi mythology, Shiva is the Cosmic Dancer who performs his divine dance to continue the unfolding of all existence, and create harmony in the universe. The Cosmic Dance of Shiva is called “Ananda Tandava”, meaning the Dance of Bliss. It symbolizes the cosmic cycles of creation and destruction, as well as the daily rhythm of night and day.

“Dancing is an art in which the artist and the art created are one and the same, thought to evoke the oneness of God and creation.” Explains Ananda Kentish Coomaraswamy in “The Dance of Siva”. Shiva’s dance is “the clearest image of the activity of God which any art or religion can boast of.”

According to Fritzof Capra, “the Dance of Shiva symbolizes the basis of all existence. At the same time, Shiva reminds us that the manifold forms in the world are not fundamental, but illusory and ever-changing. Modern physics has shown that the rhythm of creation and destruction is not only manifest in the turn of the seasons and in the birth and death of all living creatures, but is also the very essence of inorganic matter.”

“According to quantum field theory, the dance of creation and destruction is the basis of the very existence of matter. Modern physics has thus revealed that every subatomic particle not only performs an energy dance, but also is an energy dance; a pulsating process of creation and destruction. For the modern physicists then, Shiva’s dance is the dance of subatomic matter, the basis of all existence and of all natural phenomena.”

In a spirit of cross-cultural appreciation, this year’s How Weird Street Faire will feature music and art from India and beyond. The faire will end with our version of the “Cosmic Dance”. We will attempt to break the world’s record for the Largest Bollywood Dance, a tribute to Bollywood’s role as the largest film genre in the world.

This year’s center intersection, the faire’s legendary urban crop circle, with feature a Temple to Shiva and the Cosmic Dance. In the middle will be a two meter tall statue of Shiva Nataraja, the Lord of Dance.

On June 18, 2004, a two meter tall statue of the Indian deity Shiva Nataraja, was unveiled at CERN, the European Center for Research in Particle Physics in Geneva. The statue was given to CERN by the Indian government to celebrate the research center’s long association with India.

In choosing the image of Shiva Nataraja, the Indian government acknowledged the profound significance of the metaphor of Shiva’s dance for the cosmic dance of subatomic particles, which is observed and analyzed by CERN’s physicists. CERN represents the cutting edge of technology, from creating the World Wide Web, to operating the Large Hadron Collider, the world’s largest scientific experiment.

The plaque on the statue concludes with a quote from Fritjof Capra, “Hundreds of years ago, Indian artists created visual images of dancing Shivas in a beautiful series of bronzes. In our time, physicists have used the most advanced technology to portray the patterns of the cosmic dance. The metaphor of the cosmic dance thus unifies ancient mythology, religious art, and modern physics.”

Raising our consciousness and understanding leads to peace.

Shiva’s dance at CERN, a global center of technological innovation… 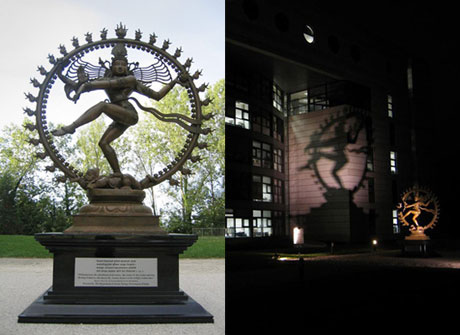