On Tuesday May 27, 2014, the three astronauts preparing to blast off for a six month stay on the International Space Station held a press conference at the Russian cosmodrome facility in Baikonur, Kazakhstan. Alexander Gerst of Germany, Maxim Surayev of Russia, and Reid Wiseman of the United States answered questions about their trip, the 40th expedition aboard the ISS. For weeks, hostility between Russia and the US and Germany had been building, with their international cooperation in space at risk. The topic of politics, and the ongoing situation in Ukraine came up when a Russian journalist from NTV asked, “Because of the events in Ukraine that we all know about, the relationship between the United States, Russia, and Germany became pretty tense. Do you feel this tension on the level of your team?”

Instead of answering out loud, the three astronauts stood up and hugged each other. “This is our answer,” astronaut Wiseman said in Russian. “Yes, this is our answer for everyone to see,” cosmonaut Suraev added.

Commander Maksim Suraev then gathered his crew together for a collective self portrait of three smiling friends, with all of the journalists in the background. “Space is without borders, we fly to an international space station where we do experiments that come back to Earth and benefit all of us – they benefit all humankind,” he said.

The crew docked safely with the ISS early Thursday morning, six hours after blasting off, and are currently in orbit around the Earth. 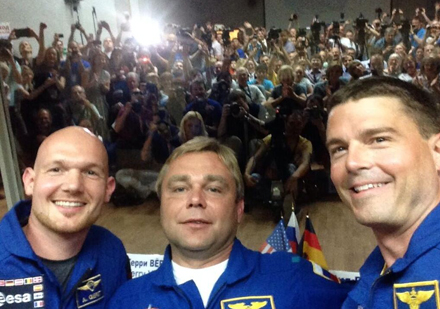 “Space is without borders.”

Hugs not war… in space!