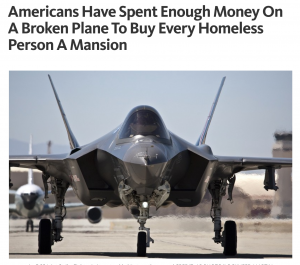 Hayes Brown wrote a column for Think Progress on how Americans have spent enough money on a broken plane to buy every homeless person a mansion. We are giving much needed money to a few private companies to continue the racket that is war…

Just days before its international debut at an airshow in the United Kingdom, the entire fleet of the Pentagon’s next generation fighter plane — known as the F-35 II Lightning, or the Joint Strike Fighter — has been grounded, highlighting just what a boondoggle the project has been. With the vast amounts spent so far on the aircraft, the United States could have worked wonders, including providing every homeless person in the U.S. a $600,000 home.

It’s hard to argue against the need to modernize aircraft used to defend the country and counter enemies overseas, especially if you’re a politician. But the Joint Strike Fighter program has been a mess almost since its inception, with massive cost overruns leading to its current acquisition price-tag of $398.6 billion — an increase of $7.4 billion since last year. That breaks down to costing about $49 billion per year since work began in 2006 and the project is seven years behind schedule. Over its life-cycle, estimated at about 55 years, operating and maintaining the F-35 fleet will cost the U.S. a little over $1 trillion. By contrast, the entirety of the Manhattan Project — which created the nuclear bomb from scratch — cost about $55 billion in today’s dollars.

Buying Every Homeless Person In The U.S. A Mansion

On any given night in 2013, the Department of Housing and Urban Development concluded, there were an estimated 600,000 homeless Americans living on the streets. Numerous studies, however, have showed that rather than putting money into temporary shelters or incarceration, communities have saved millions of dollars by investing in permanent homes for the homeless. A recent report showed that in one Florida community, it cost taxpayers an estimated $30,000 to take the homeless off the streets through traditional methods, but only around $10,000 per person to give them permanent housing and provide job training and other support. Expanding that concept to the Federal level, even taking into account things like varying real estate prices around the country, it’s possible that $7.4 billion would be more than enough to start a program nationwide. With the full amount spent on the F-35 at its disposal, the U.S. could afford to purchase every person on the streets a $664,000 home.

The United States is falling apart. A lack of funding for bridges, roads, and other infrastructure has led to collapses across the country and the more than 63,000 bridges that have been labeled as “structurally deficient.” The Department of Transportation’s total budget request for next year is $90.1 billion, part of a four-year budget of $302.1 billion with $199 billion set aside to rebuild America’s roads and bridges. Obama has for the last two years called for a $50 billion lump sum to be added to the on top of DOT’s budget to help address the growing need, and twice Congress has rejected this proposal. If the U.S. were to have channeled the $298 billion is has spent so far on the F-35 — and continued spending at that level for the next six years — the U.S. would be halfway towards closing the $1.1 trillion gap in investment needed in infrastructure, according to the American Society of Civil Engineers. In addition, a report from the Center for American Progress, citing Moody’s Analytic’s chief economist, estimates infrastructure investment generates $1.44 of economic activity for each $1 spent. That sort of claim can’t be duplicated in the spending on the F-35.

Imagine what we could achieve with peace, and different priorities.

“Every gun that is made, every warship launched, every rocket fired signifies, in the final sense, a theft from those who hunger and are not fed, those who are cold and are not clothed. This world in arms is not spending money alone. It is spending the sweat of its laborers, the genius of its scientists, the hopes of its children. The cost of one modern heavy bomber is this: a modern brick school in more than 30 cities. It is two electric power plants, each serving a town of 60,000 population. It is two fine, fully equipped hospitals. It is some 50 miles of concrete highway. We pay for a single fighter plane with a half million bushels of wheat. We pay for a single destroyer with new homes that could have housed more than 8,000 people.” – Dwight Eisenhower, 1953