“To the Iranian people, to all the fathers, mothers, children, brothers and sisters, for there to be a war between us, first we must be afraid of each other, we must hate. I’m not afraid of you, I don’t hate you. I don’t even know you.”

That was the beginning of a letter to the Iranian people by two Israeli graphic designers. Fed up with the growing hysteria over a possible war between their countries, Ronny Edri and Michal Tamir, a couple from Tel Aviv, decided to take matters into their own hands and reach out directly to the Iranian people on behalf of the Israeli people. They thought, “Why not try to reach the other side; to bypass the generals and see if Iranians really hate me?” The Israeli people do not want a war, as recent polls have confirmed, and it appears that the majority of Iranian people do not want war either.

It all started when Ronny and Michal partnered with a small preparatory design school called Pushpin Mehina, and uploaded posters to its Facebook page of themselves with their children above the message, “Iranians, we will never bomb your country, we love you.” 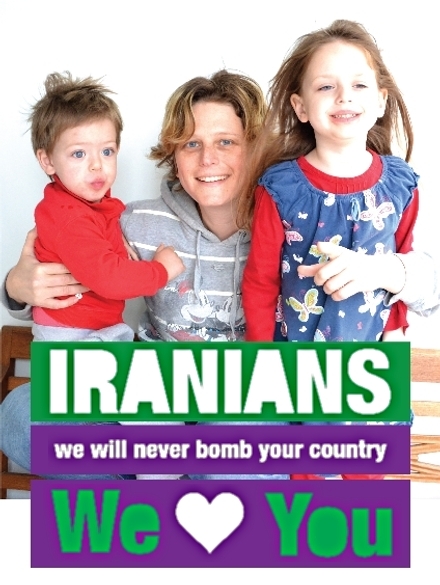 At first ridiculed and called naive, the facebook initiative quickly took off, and within two days Iranians were joining the Israelis in launching “love bombs” over the internet. Soon thousands were spreading the messages of peace and love, and it’s continuing to grow. Anyone can contribute by adding their picture to the message. Many of the Iranian pictures have the faces obscured because of fear of reprisals from the government, but some have friended the Facebook page and written letters of thanks and encouragement. “We love you too my friends,” says one message from Tehran. Another Iranian writes, “You and your initiative are just so amazing! Just because our governments are hateful and wrong doesn’t mean we have to be the same way. I love you with all my heart and I wish you all the best!”

In spite of the initial reservations, the campaign is working, using social networks to bypass the mainstream media and government push for war and tension. It is directly reaching average people who are tired of being pushed into conflicts. It may not stop any military action, but it is building bridges of understanding between Israel and Iran, and it is creating a widespread awareness that war is not inevitable. And that there is no reason to hate each other.

Ronny ends his letter to the Iranian people extending a hand in friendship. “I’m not an official representative of my country. I’m a father and a teacher. I know the streets of my town, I talk with my neighbors, my family, my students, my friends and in the name of all these people… we love you. We mean you no harm. On the contrary, we want to meet, have some coffee and talk about sports.”

Inspired by the recent Facebook campaign, some Israeli activists created the Love and Peace Campaign to help spread the exchange of love between Israelis and Iranians. Their goal is to replace the harsh political rhetoric on both sides with sincere humanity and a desire to work together as friends rather than fight.

One message from an Iranian explains, “We also love you. Your words are reaching us despite the censorship. The Iranian people, apart from the regime, do not hold a grudge nor animosity against anyone, especially not the Israelis.” 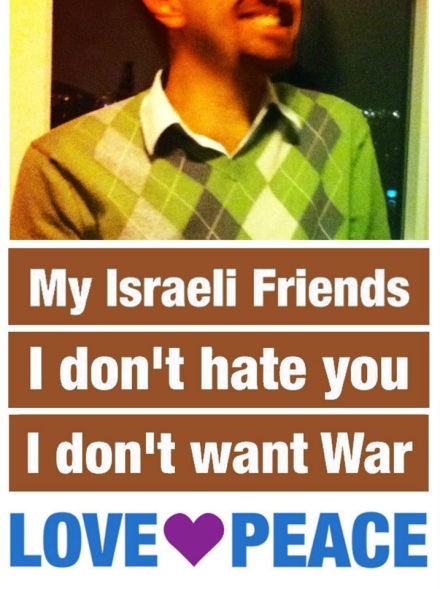 Facebook has been used by many “enemy” peoples to initiate direct communications and create an understanding that they aren’t really enemies after all. On the peace.facebook.com page, you can see various metrics of global outreach and interconnections. For example, according to the website, over 32,000 connections were made in the past 24 hours between Israelis and Palestinians. Through the internet and social software it becomes possible to overcome the stereotypes and misconceptions we may have about each other, and realize that peace is not only possible, but universally desired.

Recently, a social network peace campaign was created to encourage cross-border friendships in conflict zones, building connections directly between people. Facebook joined up with Friends Without Borders, the creators of a massive letter writing campaign between children in India and Pakistan, to create an online version of their peace work. Friends Without Borders is a new approach to world peace, connecting people, forming friendships, creating hope and the foundations of peace. As they explain, “The simple act of writing a letter leaves deep and lasting impressions that help to humanize ‘the other.’ These are the seeds that promise to mature into a safer, friendlier world.”